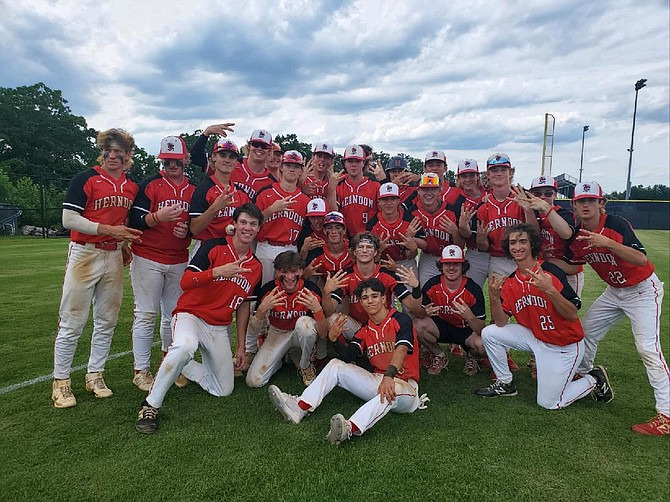 Herndon baseball team after their walk-off win in the semifinal game. Heather Lambrinides

The sight of ballplayers swarming the infield in red, white and black has become a common one the past two weeks. The Herndon Hornets baseball team has played 56 innings of baseball over the past six games, winning five of six. Four were extra inning wins, and three of those were walk-off nail biters.

The win on Tuesday, June 7 came on their home field against rival South Lakes for the title of Class 6 Regional Champions. In the 8th inning, junior Jack Morgan came off the bench as a pinch hitter and with two outs and two strikes tied the game with a single. Then in the bottom of the 11th inning, in front of a frenzied crowd, senior right fielder Connor Brennan singled in senior shortstop Hill Naske for the winning run. Herndon students stormed the field under the lights. The last time Herndon baseball held the regional title was 1996, and this was just the third time in the 111 years since the high school opened its doors.

Two days later in the state quarterfinals, with their matching mullets freshly bleached, they beat West Springfield 7-6 in 10 innings.

They went on in the semifinals to walk off Colgan, the number two ranked team in the state, 2-1 in 10 innings. Senior Matthew Neach smashed a single and junior center fielder Mitch Mauer slid headfirst across home plate in a cloud of dust and again the Hornets swarmed yet another infield.

The next day, in the state final, they came up short, as Freedom High squashed their seventh inning rally and beat them 2-1.

Coach Stephen Frank volunteers with both Reston and Herndon youth baseball leagues and travel teams. Not only does he know all the high school players in the dugout, but he knows many of the local youth ball players who scream in the crowd, covered in dirt from their own practices.

Frank began as Herndon High School coach in 2020, when the team trained but did not play games due to COVID-19. In 2021 the team went 14 and 3 and lost the regional semifinal to James Madison, who went on to win the state title.

With a taste of play-off baseball, the Hornets resolved to fight even harder in 2022. “From day one I challenged them to be the toughest team in the area — and physical toughness was a tiny portion of what I meant. They developed an attitude of, ‘We are going to find a way to get things done — to play our game and we will have a chance,’” said Frank. They faced a major challenge when their top player, pitcher Jackson Coen, missed the whole regular season with an injury. When he came back to hurl a no-hitter in the first game of the regional playoffs against Chantilly, they were back and stronger than ever. The team had bonded through adversity and were on the hunt for their goal.

“The best part for me is the family we’ve created,” said Matthew Neach, who had the winning hit in the state semifinal game. “When we break down our huddle we always say, ‘Herndon on three, family on six.’ All of us on the team aren’t teammates, we’re brothers.”

“This season was highlighted by our shared time together — a great group of committed, selfless, hard-working kids who cared so much for elevating and representing our program. They did everything a coach could ask, and sometimes much more. They are the most successful team in school history. They will always have a place in my heart,” said Coach Frank.

The Hornets have six starting seniors going on to play college baseball next year, which will leave them a young team, but a young team that trained under the best.

“I had the time of my life playing with this team,” said Mauer, who will return next year as a senior. “We formed a brotherhood which I will never forget. We will continue next year to win for them. The younger kids will step up when the time comes.”