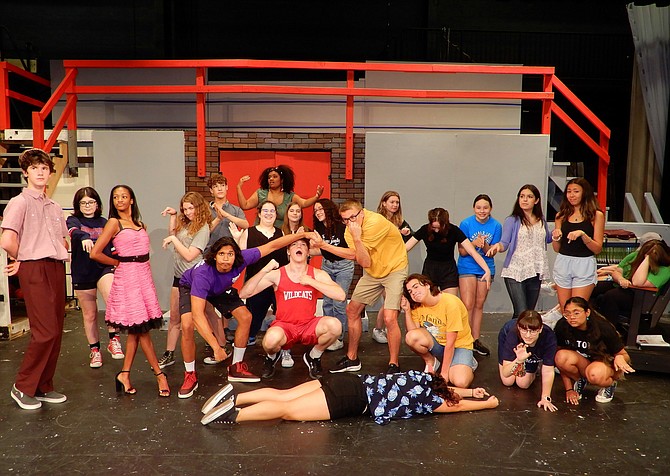 “It’s been a blast, auditioning students from schools all over Northern Virginia and getting them ready for the show,” said Director Greg Stowers. “We have rising eighth-graders through 2022 high-school grads, all performing together.”

“Having such talented kids is a gift,” he continued. “They all chose to be here and are really dedicated and rising to the challenge of putting together a show in three weeks – and they’re doing a great job. We’ve also got a wonderful group of parent volunteers helping sew costumes, build sets and create props.”

Set in 2007, the story takes place over five days in an Albuquerque high school, with scenes in the gym, auditorium and classrooms and on the school roof. Popular jock Troy falls in love with new student Gabriella, upsetting Sharpay, who has a big crush on Troy. Making matters worse, Sharpay and her brother Ryan always get the leads in East High’s school play, but now Troy and Gabriella decide to audition for the musical themselves.

“What’s great about this story is that it’s relatable to anyone of any age who’s ever struggled with finding their place,” said Stowers. “And these young actors can apply their own, unique, firsthand experiences to what they’re doing onstage.”

Playing Ryan is Franklin Middle grad John Poncy. “Ryan doesn’t want the school to change and wants people to stay in their usual cliques,” said Poncy. “He’s sassy and has a big personality, but it’s diluted when he’s with his older sister. But he eventually learns change is good and people can be who they want to be.”

“I love playing Ryan – he’s super fun and quick-witted and has a spectacular, over-the-top personality,” added Poncy. “And I like his interaction with Sharpay. My favorite song is “Bop to the Top,” Sharpay and Ryan’s big number when they’re auditioning for the musical. We get to do some fun dance moves, twists and lifts; I’m a dancer, so I especially like that.”

Rising Chantilly High senior Victoria Felder portrays Sharpay. “She’s bold, confident and ambitious and has big dreams to be a superstar and play the lead role in every show there is,” said Felder. “She’s also a bit misunderstood. She comes across as super confident but, like all the other characters, she has insecurities, but doesn’t let them stop her.”

Felder said her role’s “so much fun” because Sharpay is “glamorous and fabulous and everyone wants to be the popular girl. She’s also very dramatic and, for an actor, the more drama, the better. It’s just so exciting playing her because there’s no limit to what I can do with this character.”

Felder especially likes the song, “Stick to the Status Quo,” sung by the whole cast. “Sharpay gets to have her highest diva moment in it and really act out,” she said. “And I love how it’s super high energy and a catchy song everyone can jam to.”

All in all, said Felder, “I think the audience will be impressed by how much talent is in one room. And they’ll be starstruck by the amazing choreography and upbeat songs. There’s never a dull moment onstage and nothing people won’t enjoy about this show.”

Justin Short, a Westfield rising junior, plays popular kid Troy. “He’s under lots of pressure to win the basketball championship and is seen only as the basketball star,” said Short. “But when he discovers he likes singing, he finds a new part of himself that no one can understand. He’s also a good guy who’s always kind.”

Short enjoys portraying Troy because “He’s so versatile – he sings, dances, acts and plays basketball, so I get to explore different facets of him. Playing a lead role is a lot of stress, but fun – similar to what my character experiences.”

His favorite number is “Getcha Head in the Game,” which he and the basketball team sing together. Said Short: “We get to do some cool, fast singing we don’t normally get to do – with some random, barbershop sections thrown in.”

Proud of the whole production, he said, “Everyone is so invested in everything about it. We’re all having fun, and it shows. The energy is there and will make the audience have a good time, too.”

Playing Gabriella is Hope Carey, who describes her character as “very shy and intelligent. But she has other interests besides schoolwork; and since her family is constantly moving, she keeps trying to not be known only as the smart girl. Although she doesn’t like being in the spotlight, she’s friendly and finds that she doesn’t have to fit into only one box.”

Carey said Gabriella is interesting to play because “I get to see her other sides as she realizes being in the spotlight isn’t so bad. I like her development as she becomes more comfortable with herself and what she likes to do.”

Carey especially likes the song, “Can’t Take My Eyes off of You,” which she sings. “It’s a cute song,” she said. “And it’s fun to sing because it has lots of feeling behind it and the harmonies are really pretty.”

She said audiences “will love the connection they’ll feel to the characters and how heartwarming the story is. It’s an energetic show, and the cast makes the audience feel that excitement as they watch it. People will also love seeing all the big, catchy and iconic ensemble numbers performed live in front of them.”