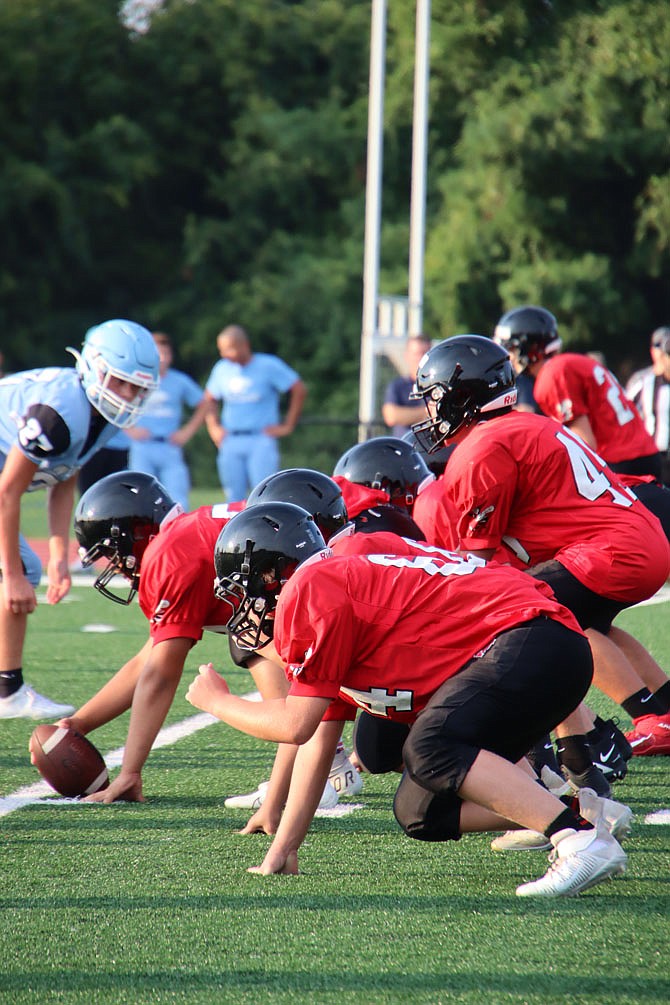 Herndon’s freshman football team officially kicked off their season on Thursday, Sept. 9 with a victory against the freshman South Lakes Seahawks.

Herndon went on offense first, moving the ball down the field quickly and finishing off the drive with a 39-yard touchdown to take a 7-0 lead. On a later third down, Herndon intercepted a pass and took it all the way to the endzone for a pick-six to stretch the lead to 13-0. On the very next drive, the Hornet defense took advantage of another turnover on a fumble recovery. Herndon was able to move the ball close to the red zone but had to settle for a field goal to make it 16-0 Hornets. And right as South Lakes got the ball back, the Hornet defense stepped up yet again, gaining another fumble recovery for their third straight defensive turnover. The Hornet offense capitalized on the opportunity with an 8-yard touchdown run to increase the lead. And on defense, a trend continued as the Hornets grabbed their fourth turnover of the game on another fumble by the Seahawks.

The offense had no problems moving the ball into the endzone, as another touchdown run expanded the lead. The Hornets’ defense kept their momentum all night, forcing South Lakes to punt deep in their own side of the field. The offense hit on a deep pass to set up first and goal and ran into the endzone. As the game hit halftime, the score was 36-0 Hornets. The defense continued to frustrate the Seahawks’ offense as South Lakes punted on the first drive of the second half. However, when the Hornets got the ball back, the Seahawks took a fumble recovery of their own to put the ball back in the hands of their offense. Soon after that, the Hornet defense intercepted a pass that was floating towards the right side of the field. Despite some powerful runs, the Hornets were not able to score, and South Lakes took over possession.

Herndon left fielder and catcher Graham Sears said this week that he committed to Stevenson University to play baseball. Stevenson, in Owings Mills, Md., is a Division 3 school in baseball. Graham started in left field for varsity baseball last season and batted second the majority of the season.

On Sept. 11th the HHS girls’ and boys’ cross-country teams ran in the Monroe Parker Invitational at Burke Lake. Big congratulations to the girls’ varsity team for placing fifth out of 23 teams, and a shout-out to Junior Gillian Bushee for coming in first place with her personal record time of 17:37.

Varsity football is now 0-2 after dropping game two to Osbourn Park 40-14 on Friday. Herndon started off strong with their first drive but fumbled at the goal line. The game went downhill from there. The highlight of the game was a 60-yard run by junior wide receiver Josh Wise. Herndon hopes to get a win against rival South Lakes on Tuesday Nov. 21.