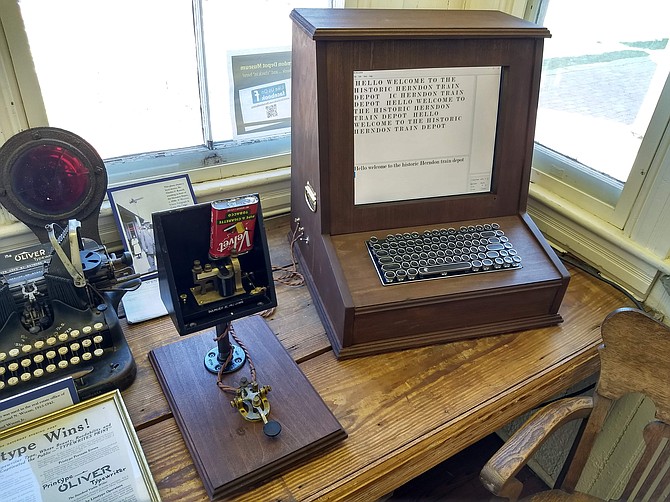 The new telegraph exhibit at the Herndon depot museum includes a telegraph key, sounder, and a computer through which messages are sent. Photo by Adam Winsor

The Herndon Historical Society reopened its Depot Museum at 717 Lynn Street for the 2020 season on Sunday, March 1, featuring a train show, a silent auction of railroad collectibles, and two fascinating new exhibits. More than 160 people attended the event.

In the depot’s Station Master’s Room was a new telegraph exhibit. Antique telegraph equipment worked in concert with a computer so that visitors could tap out Morse code messages on the telegraph key which, in turn, would be “translated” through the computer and displayed on the computer monitor in English. The exhibit was designed by Historical Society member, Adam Winsor, with telegraph and computer equipment donated by Dale Lichtblau and Patrick Walsh.

In the depot’s Waiting Room was a new USS Herndon exhibit. The USS Herndon was named after the Town’s namesake, Commander William Lewis Herndon. The ship served in WWII and led the armada in the Normandy invasion. The Herndon High School band visited Normandy last summer for the 75th anniversary celebration. They brought back many artifacts from USS Herndon Navy veterans and/or their families, which are now on display in the Depot Museum.

The Herndon Depot Museum is open every Sunday, 12 noon to 3 p.m., March through December, and by appointment all year long. For more information, contact HerndonHistoricalSociety@gmail.com or facebook.com/HerndonHistory.