‘The Lizard’ partners for betterment of the community. 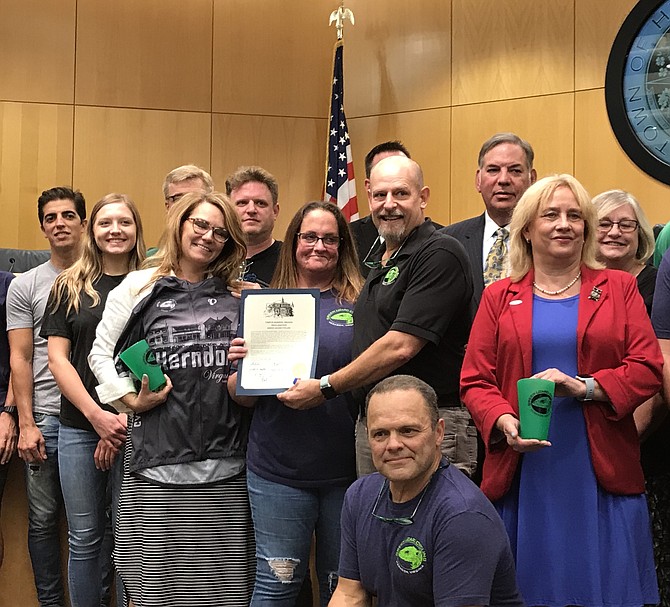 Lisa C. Merkel, Mayor of the Town of Herndon, holds a gifted commemorative Green Lizard Cycling jersey while Beth and Dave Meyer, co-owners of Green Lizard Cycling, show off the proclamation presented to them by the mayor and town council on Tuesday, Sept. 10, 2019. Photo by Mercia Hobson.

The Mayor of the Town of Herndon and the Town Council announced their appreciation to Dave and Beth Meyer, owners of Green Lizard Cycling, for their valued presence in the town and many contributions to the community through a Proclamation presented during the Town Council Public Session held Tuesday, Sept. 10, 2019.

The proclamation, read by Councilmember Cesar del Aguila, stated that the family-owned business founded in 2013 was an integral and vital part of the Herndon community. "The Meyers and Green Lizard Cycling have been actively involved in partnering with the town and local organizations toward the betterment of the community. Their advocacy for area cyclists has included working with groups such as Reston Bike Club, Washington Area Bicyclists Association, Fairfax Alliance for Better Cycling, Mid-Atlantic Offroad Enthusiasts and the Washington Bicycle Authority.” Del Aguila added that the Meyers hosted many events such as Crooked Lizard Bicycle Scramble benefitting Friends of Homeless Animals and Boulder Crest, community group rides and events for cyclists of all ages and abilities as well as co-hosting the Annual Fun Ride Bike-a-Thon for the Herndon High School Band.

In addition, del Aguila stated the Meyers will continue work to give back to the community through The Green Lizard Foundation formed to encourage healthier living by assisting youth of the community with options for recreation, exercise and nutrition and "provide training and sponsor and donate resources to initiatives that support the growth of safe cycling and healthy living."

During comments from the audience, Ian Macdonald, member of Herndon’s Pedestrian and Bicycle Advisory Committee, thanked the Town of Herndon for recognizing the Green Lizard and shared stories about the Lizard being an ambassador for Herndon. Looking over the packed crowd, he said, "I see a lot of faces I know. One of the things that has become an amazing thing about the Green Lizard, this is a community. You see us here. We have our bikes here. … We have a number of people here with our Green Lizard bicycle shirts. On the weekends, you will see us representing Green Lizard and Herndon all around the area. … As we are biking, we are getting high fives, and we're getting, ‘Hey, Herndon.’ So the name Green Lizard and Herndon are really well known. … Beth and Dave have created a centerpiece for the town."

Dan Fischer, President of The Green Lizard Foundation, explained the nonprofit 501(c) 3 was recently created to expand what the Meyers were already doing. "Cycling and fitness, in general, is something we really want to promote in the community...we look forward to partnering with you all, schools and organizations to make sure anyone, in any economic circumstance, is able to participate in any events they want."

Kristen Wooten with a 20-year teaching career in Herndon echoed that the beauty of the Green Lizard was that it centered the town. "Always giving back and looking out for our little people," Wooten said.

After receiving the proclamation, the Meyers hosted a gathering at their bike shop on Lynn Street. Staff, friends, family and community gathered to celebrate. Among the many well-wishers mingled Christopher Burgess, Vice President, Marketing and Communications at Northwest Federal Credit Union. Asking Dave and Beth Meyer to join him, Burgess spoke to the crowd, presented a check in the amount of $2,500 to the Foundation.

As of Sunday, Sept. 15, Jason Sickles, Board Member of The Green Lizard Foundation reported the organization raised more than $13,000 in the last week. Beth Meyer explained funds raised would be used to not only ensure needy youth have access to fitness events, bicycle repairs and donations, but that food-insecure children have nutritious foods outside of school.

Friends of The Green Lizard Speak Out

Scott Schelling of Herndon, referencing The Green Lizard Foundation: "An opportunity to reinvest in the sense of community the Green Lizard brings to Herndon and help disadvantaged kids get healthy."

James Kohler of Fairfax: "They did better than anyone could. This is brilliant."

Robin Walker of McLean: "I'm a Green Lizard regular and just wish my coffee shops would have bikes with them."

Robert Mosely of Vienna: "They are good people."