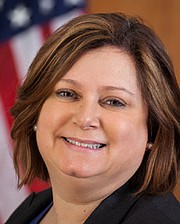 Councilmember Signe Friedrichs initially presented motions to stall the vote on the tax rates, and later changed her mind. "I don't want to contribute to an impasse; I do want there to be a conversation [about the budget].” 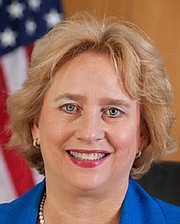 Councilmember Sheila Olem presented a motion to defer action on on setting the tax rates in an attempt to stall the budget process and give time to address concerns she said had been shared with her by some members in the community about the overall budget.

Herndon Town Councilmembers Sheila Olem and Signe Friedrichs stunned fellow councilmembers in a surprise attempt to stall passage of the measure which levies taxes on the town real estate and homes, meals, cigarettes and more. They did so during Council proceeding on the ordinance held Tuesday, April 24, 2018, in Town Chambers during the Public Hearing on the Proposed FY 2019 Budget. There is no increase in tax rates in the proposal, but the measure requires five votes to pass.

Council approval of the ordinance is one of three pieces required to approve the budget. By law, the Council must adopt FY 2019 Budget by June 30, 2018, with enactment to begin on July 1, 2018, the first day of the fiscal year.

"We are not proposing a change in our tax rate,” said Mayor Lisa C. Merkel earlier in the evening. The ordinance maintained and did not increase the town's real estate tax set at $0.2650 per $100 of assessed value, the meals tax at 2.5 percent and all other taxes and levies remain unchanged in the budget proposal. Taxes generated by the ordinance are directed to the primary operating fund of the town, the General Fund. If the Council wished to increase a tax rate, it had to be advertised twice and hold two public hearings before any Council.

Not anticipating any opposition, Councilmember Grace Cunningham put forth the motion to approve the tax rates. “There have been some really smart decisions by our staff,” she said. “They have found every penny to save taxpayers from any increases.”

Olem presented a substitute motion to defer consideration on the ordinance until May 5, 2018. Olem said she was doing so because some individuals in the community shared concerns about the overall budget. She wanted more time for budget discussion. Olem qualified her actions by mentioning how "lean and tight" the budget was while noting, "You can't pass one of the three items without talking about all of them."

Friedrichs agreed with Olem yet expressed praise for the budget. "This is a great budget in many, many ways, [but] we need to talk about something constituents have brought up to us."

Olem's substitute motion to delay action confirming the tax rates failed in a vote of 4 to 2 as Councilmembers Bill McKenna and Grace Cunningham, Vice Mayor Jennifer Baker and Mayor Lisa Merkel voted “No.”

BUT FIVE VOTES ARE REQUIRED to pass the tax rates, and in that vote, Olem and Friedrichs voted, “No.” McKenna, Cunningham, Baker and Merkel voted, “Yes.”

A volley of motions to delay, defer and continue action on the tax rate ordinance by Olem and Friedrichs erupted, each motion turned down by the other councilmembers in winning votes. Questioned why they were doing this, Friedrichs said, "The matter Councilmember Olem and I are concerned about is not the real estate tax."

"The only tax I'm concerned about is the meals tax,” Olem’s said. “I just want to have time to talk about the budget and the long-term, and whether or not the [tax] rate goes up."

The four other councilmembers expressed frustration with the tactic.

“I'm a little disappointed this information was not shared before the public session this evening,” said Cunningham. “I don't believe we've had the intent to raise taxes, and if the intent is not to raise taxes, I would strongly urge my colleagues to approve the advertised tax rate that we discussed extensively with significant input ... none of which have changed for a number of years. To get a ninth inning surprise like this is extremely disappointing.“

Baker expressed similar sentiments, “I think this is bad form to do in a public hearing when we've been talking about the budget since February. … We have a responsibility to pass the budget and given the restrictions on time that we have, and with legal obligations, I think it is really important to pass something today."

A second attempt to pass the ordinance through a reconsideration motion failed. "We are at an impasse again,” said Merkel in frustration. “There is no decision. We're back where we started. We are either going to have to have five votes to pass it tonight, or we are going to have to have enough votes to continue it. We cannot have a ‘no decision’ and send us into the next fiscal year without a budget. I would implore someone to make a motion."

Cunningham made another reconsideration motion to approve the tax rates. She told her two opposing colleagues to look solely at this public hearing, which was the tax rate levy. "Unless there are plans on raising any of these taxes, I will urge you to pass them as advertised.”

Friedrichs said, “I don't want to contribute to an impasse [but] I do want there to be a conversation.”

The clerk called the roll on the question to pass the resolution for the third time.

Merkel said, "We are back where we started. A recess was called. All councilmembers left the dais.

UPON THEIR RETURN, Merkel provided guidance. They could enter a motion to reconsider the ordinance once again, or move on to the meeting and possibly not have a budget before the fiscal year started.

"Would either of the ‘no votes’ like to reconsider?” asked Merkel.

Friedrichs agreed, and said she would like to make a motion to reconsider but with a condition "...If we agree we will discuss this at our next work session... the matter of raising the meals tax or some other method of raising funds for this very tight budget."

Baker put forth the motion to approve the tax rates, “with an addition that we discuss this, the meals tax rate at the next work session. … We have a responsibility to pass the budget. on time. … I think it is really important to pass something today."

The clerk called the roll.

The motion passed 5 to 1 with Friedrichs now voting “Yes.”

The Town Council quickly passed and adopted the second budget item for the evening, the Fiscal Planning Resolution. Approval for the third budget process item, the Appropriation of Funds came quickly. “We’ve adopted the tax rate and approved the budget,” said Merkel. “Then we might as well appropriate the funds.” The motion to appropriate funds carried with a vote of 5 to 1.

THERE WERE SOME INCREASES in fees: